Very recently they released their first full length album independently. Along with new album “The Empyrean Heaven”, they also announced the new band name and line-up. Seemed like the ideal way for me to have a conversation talking about the early days of existence, ambitions, future plans and of course the new album… the man who was willing to cooperate was one of the founders named Erik Callaerts, the indispensable force behind Cygnus Atratus !

Stefan: Hails Erik, welcome to the home of Metal To Infinity ! First and foremost, congratulations with the release of “The Empyrean Heaven” which is a fantastic output in my opinion. We discuss that a bit later on, to start I’d like to ask some information about the establishing of the band, back then known as Cygnus.

Erik: After being in a progband for a few years it was time to put a somewhat “heavier” formation together, and together with Benny Vercammen on bass and Tom Tuypens on drums the foundation for the first epee of ‘Cygnus’ were laid. We recorded this without having found a singer yet, so the vocals came way after the music. All and all we were really very surprised with the very good response of the epee – even the more ‘difficult’ tracks.

Stefan: In which demo/tapes/vinyl and stuff back in the late seventies. Ever since, it is impossible to live one single day without my dose of hard rock or metal … an indispensable element in my life really. What about yours Erik?

Erik: I started playing guitar at a very young age, and I was in bands by the time I was 16 (together with bass player Benny Vercammen for that matter). We really enjoyed bands like Judas Priests and Ozzy and the like, but I have always had an interest in a lot of other music styles as well.

To be honest, there is no difference for me between listening to Beethoven, Symphony X or Paco de Lucia. Music is an universal language that speaks to the heart in any form.

Stefan: Name of few of your own idols, people that inspired you?

Erik: Vinnie Moore and Yngwie for the neo classical shredding (of course), Rafael Cortes and Vicente Amigo (flamenco guitarists) for the technical mastering and feel, and bands like DGM, Kamelot and Symphony X for the ‘awesome’ factor. There are also a bunch of writers, painters, poets and movie directors but that would make the list too long I guess.

Stefan: Co-founding member/bassist Benny Vercammen and yourself played in a band called Omega X before the rising of Cygnus. What type of band was it – still active or not these days?

Erik: A very experimental prog band which managed to produce songs that lasted for 14 min. I would like to re -record some of the Omega stuff because the music was really great – some of my best work in my humble opinion – but the production sucked bigtime (homemade level), and I am afraid it would be very very hard indeed to find an audience for the Omega X stuff. Pity.

Stefan: But there were more bands you teamed up with, right?

Erik: Yes, a few surprises there, but let’s leave it in the past and turn our eyes to the future, shall we?

Stefan: Back to Cygnus, where does the name comes from?

Erik: Cygnus X-1 is the first black hole ever discovered, approximately 300m wide with a mass of 8.7 times the mass of our own sun.  So it can’t get any heavier than that, no? And Cygnus Atratus means ‘black swan’ in Latin, so enough epic drama there.

Stefan: Singer Frank Vermeiren and drummer Kjell De Raes joined forces later on and with this way line-up the EP “The First Hour” was recorded. Everything went as planned in advance and how did the press and media respond to this first achievement?

Erik: Positive beyond expectation, we were really quite surprised.

Stefan: Those days, what about Cygnus’ live performances?

Erik: We went from the epee directly to the recording of the full album (and some line-up changes), so the band did not have the opportunity to play live.  We spent an awful lot of time in the studio the past year, so we are now ready to take to the stage.

Stefan: Shortly afterwards it did not run smoothly because the singer decided to leave the ranks, what happened?

Erik: The singer no doubt had his own personal reasons, but we, of course, had a very big problem replacing one of the best voices in rock music around. Specially because the album was almost ready. Big setback.

Stefan: Letting the band derail was not an option, so the search for a new singer was on. Ex-FireForce frontman Filip Lemmens joined the fold for a while as guest musician, never thought to include him as a fixed value in the band?

Erik: Yes. That was the idea, but it didn’t work out. Big setback. Again. Lives full of setbacks, it seems.

Stefan: Around that time you also changed the name of the band to Cygnus Atratus, what was the main reason?

Erik: A label suggested it, since the name Cygnus seems to be rather popular as a brand.

Stefan: Meanwhile your brand new album “The Empyrean Heaven” has been launched and have to tell you honestly, it’s a real killer one man ! Along with a new singer and a keyboardist, the album shines bright fully…. Please introduce the new members Erik.

Erik: There is of course founding member esteemed bass player Benny Vercammen, one of the greatest bass players around, with a sense for melody and a musical insight that is very hard to find, I think, and further on we have Kjell De Raes on drums, literally a ‘master’ in music,  and the very talented Anke De Raes on keys.

And newest member vocalist Iris L’or is not only a performer in heart and soul, but has one of the most diverse and beautiful  voices I have ever heard. She replaces Marieke Bresseleers (Lords of Acid/ Circle unbroken), who did the vocals on the album.

I count myself very lucky and blessed to be in the company of these fine and talented musicians, and cannot thank them enough for being there.

Stefan: You wrote the lyrics and like to ask if it’s possible to guide me through the main content of the songs. Can we speak of a concept album here?

Erik: The first hour was originally meant  as a concept album, – it is a story about the last days of the human race, when the planet is almost gone and deprived of its resources. Only the Cyborg nation (the remains of the ‘old’ technical civilization), and the ‘Earth people’  (nomadic horsemen) remain, and are at war with each other, under a dying sun. Epic SF stuff.

Unfortunately for some reason (money, always money) I could not put all the songs in 1 production, albeit there are some more ‘First hour’ songs on ‘The Empyrean heaven’  – Cyborg, Quanying, Solitude, Sunrise, and War.

One day perhaps, it would be great to make a real concept album.

For the other songs: Lady of stone is a tribute and declaration of love to my life partner P.

Ritual is an old school sword and sorcery fantasy story, ‘After all’ is about some dark night soul searching in relation to emotional  guilt and debt.

I think lyrics are very important, and should have meaning. Even the fantasy stuff.

Stefan: The cover artwork looks awesome – who’s the creator of such a fine magnus opus?

Erik: Columbian artist Harley Velasquez. It was really great to work with him.

First quality artwork and a very skilled and patient man.

We are in the process of producing a video of our ballad ‘Quanying’ with his artwork – high expectations, should be great!

Stefan: Where and by whom the albums has been recorded/produced/mastered?

Erik: ‘Artwork studios’ Houthalen and ‘tonefabrik’ Germany for the mastering.

Stefan: The sound quality can be considered as ‘not too polished’ in my opinion, was this the predetermined plan or something went a little wrong during the mastering process?

Stefan: Are you agreeing with the words I wrote in my review for “The Empyrean Heaven”? Speak frankly.

Erik: When you look at a painting or listen to music (or judge any art form for that matter), I think ‘The beauty is in the eye of the beholder’.

That being said, it was a very well written and in depth review, and very positive.

We are of course very grateful as a band that our work is so appreciated, it means the world to us…. Thank you.

Erik: Very positive by the audience, but we (and also Dark Sabbath, the special guest band), have had some PA/ sound problems. That was a bit of a bummer.

But I think everybody enjoyed the show. And our backdrop and side banners turned out really great. Nice.

Sold a lot of cd’s also. That was also nice.

Stefan: More concerts on the way the following weeks/months?

Erik: We are working on a few ambitious live performances ourselves, but feel free to call and book the band. Always happy to oblige.

Stefan: I’m pissed about the fact that first class bands have a hard time getting signed here in Belgium. God damn unfortunately, Cygnus Atratus is next in line who have to deal with this fucked up situation. Do you have any idea what the reason might be?

Erik: Since I am proud to say that we have never ever made any compromises when it comes to creating and playing our own music, we have already turned down some offers (for which we are grateful, in any case)  – but the band needs a label that takes things seriously, as do we.

That being said, I fully agree – it is not easy to get any credits for our work, we can only hope people take the time to listen to our songs, – and that we can convince them of the talent and quality of our record.

In any case, it matters not, – me and Benny will probably still make music three days after our death.

Hopefully somewhere in’ The Empyrean heaven’.

(Hope Benny -or me-  will not wind up in the other place, that is, – that would be something of a problem).

Stefan: Anyway, true fact is that we have a new killer band on the Belgian map, something to be proud of ! What about the future plans Erik, first promoting the new album I suppose? By the way, does a promotion campaign looks like inside the camp of CA?

Erik: We have put a lot of effort and heart  in the record, and the best ‘campaign’ is friends listening to it and telling their friends to take a go at the songs.

And by listening I  do mean OLD SCHOOL LISTENING, not zap 6 seconds from song to song on our bandcamp page, – and preferably while following the lyrics while doing so. Pretty please.

Quality should speak for itself.

In any case, the album went out to press and labels – and the long wait for a call for both live performances and record deals has begun…. (Frontier records, where are youuuuuuuuuuuu!!!!!!!!!).

Stefan: Then there is only the message that I really appreciate that you wanted to contribute to this interview and the good time you offered me while listening to the excellent new album “The Empyrean Heaven”. Thanks brother and feel free to speak some final words to our readers… Cheers!

Erik: Just a big thank you to all and everyone who keeps  the music alive, whatever style or favorite genre it may be,  for let us be true – the world would be a cold, empty and dark place without the wonderful gift of song. 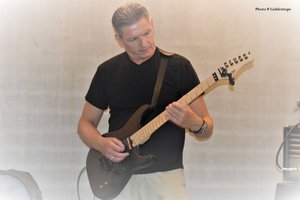